We are selling our house today.

This is nothing earth-shattering about this. Houses are bought and sold every day. What makes this sale even less momentous is that we don’t even live there. It isn’t our home and it hasn’t been for the past six years.

When we moved to the suburbs in 2009, we chose to rent our house instead of dealing with the tumultuous post-bubble real estate market and so, for the past six years, various groups of twenty-somethings have called our house home, which, until now, suited us fine.

We have had great tenants over the years, but, for the most part, I am thrilled to call it quits with my role as landlord. I am happy to be done fielding tenant emails about dishwashers that need repair. I am relieved to be finished with the monthly accounting chores, tracking rents received and expenses paid. I am excited to have one less thing on my plate.

But a part of me is unsettled. Part of me is a little sad. And as irrational as it sounds, part of me is tempted to get in my car and drive into the city to see it one more time to say goodbye – not to the house, but to the patch of dirt in front of it.

Nearly seven years ago, we planted a tall hibiscus in the middle of that small mound of soil. Desperate for a little color around the house, we splurged on hundreds of dollars’ worth of gardening tools and plants. We filled huge planters with yellow, orange, and red flowers that we couldn’t name and set them on both sides of our front door. We planted tomatoes along the side of the house. And we surrounded a tall hibiscus with countless multi-hued impatiens. If a flower was colorful, it went into our cart and eventually into the ground.

Just sprucing things up a bit, we said. But we both knew what we were doing. We were mourning.

A week earlier we had stared at the quiet ultrasound machine, silent but for the static swirl. There was no thrum-thrum-thrum-thrum, no tiny heartbeat that sounds like a thousand stampeding horses. Only the static and the ultrasound tech’s steady breath. Appointments were scheduled, and a few days later I walked into the hospital carrying a dead fetus and walked out missing a little piece of my soul.

As my husband gardened under the hot afternoon sun, I stood back and watched, willing my sorrow and sadness to be buried along with the roots. And without any intention or acknowledgement, the planting and the pruning became a sort of funeral, the hibiscus a headstone.

With the soil packed down tight, I thought we could just move on. But the months that followed were some of the darkest of my life. With the economy tanking, Matt became consumed with job stress. I fell into a cycle of despair and anger, alternating between rage at just about everyone and everything and an emptiness the depths of which I had never before experienced. And I settled into a holding pattern that revolved around fertility treatments, cycles, and single lines on pregnancy tests. Yet every time I passed that hibiscus plant, a raw and ragged peace washed over me, if only for a moment.

A year later, we moved and the plant died. In all honesty, it probably wouldn’t have survived even if we had stayed though. The soil was rocky and infertile, without sufficient sunlight, and my gardening skills are sub-par, to say the least.

There are so many things to remember about that house on Nelson Street. Bringing Jackson home from the hospital on a cold October morning. Saturday night dinner parties in our tiny kitchen. Dancing in the cramped living room. Bedrooms that were too hot in the summer, a basement that was too cold in the winter. Playdates with new friends when at least one of us would end up in tears, consumed with the fear and doubt and exhaustion that comes with first time motherhood. But of all the things that I remember about our house on Nelson Street, of all the happy and sad memories , that flower – and the wood chips that took its place – is the one that stands out the most, the thing that still carries a visceral and illogical mixture of emotions.

The plant may have been a memorial to our pain and grief, but over time, it came to symbolize our strength and resilience. Despite our pain, or maybe because of it, Matt and I grew infinitely closer as a couple during that time. And out of the compost of that flower grew a love and appreciation unlike anything I had ever felt before. Out of those roots grew an unshakable hope and an inexplicable faith.

A couple years ago, when doing a little clean-up work around the property, I noticed that a semi-circle of bricks still surrounded the place where the flower once was. I stopped in front of the place where the plant had once grown, whispered goodbye to our sweet angel, and said a prayer of thanks for Teddy, who was born a couple years after this dark time. I didn’t linger, but I did pause. I remembered, acknowledged, and then I walked away. I moved on.

And yet here I am, years later, awaiting confirmation from our lawyer that the sale has closed and the only thing that I can think about is that hibiscus plant, the bricks surrounding it, the sorrow buried in the dirt, and the hope that sprouted out of it. Nothing about this reaction makes sense to me. I rarely think about the miscarriage – or that flower – anymore so why am I so shaken? Why am I so conflicted? Why do I feel a little like I am mourning all over again? And why am I sad to say goodbye to something that represented such a dark time in our lives?

Nothing about the way I feel is logical. Truthfully, my grief didn’t seem logical back then either. Society tells us that miscarriages aren’t something to grieve; we don’t talk about them, mourn them, or honor them – at least not in the same way we do other losses. It wasn’t meant to be, well-intentioned people tell us. It wasn’t a healthy fetus, the doctors explain. It will happen when the time is right, the optimists say.

Despite all the logical and scientific reasons for a miscarriage, however, I felt an unidentifiable, inexplicable, and almost illogical feeling of profound loss at the time, regardless of any rational silver lining that was put on it. I suppose any raw personal truth – love, grief, hope, mercy, faith, fear, forgiveness – is glittered with a mysterious and almost irrational sheen. That’s what makes the human condition so magical and beautiful and hard to understand sometimes.

We leave pieces of ourselves all over the world. I left my naiveté in my hometown, my impulsive recklessness in various college apartments, my aggressive ambition in a high-rise office building downtown, and my grief in the dirt in front of that house on Nelson Street.

But as I left pieces of myself here and there, I have also carried things with me. I carried loyalty and optimism from my tiny hometown where everyone knows everyone. I carried enduring friendships from those shabby college apartments. I carried dedication and determination from those stark office buildings. And, from that patch of dirt on Nelson Street, I carried hope, gratitude, resilience, and courage.

Maybe it isn’t so much about what we leave behind, but what we carry with us that matters.

Goodbye, house on Nelson Street. Goodbye, flower that once was and patch of dirt that is now. Goodbye.

But, sweet angel, I will always carry you with me. 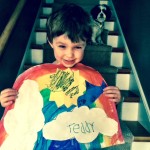 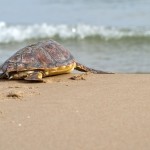 On Hard Days, Staying Soft, and Walking Toward the Water