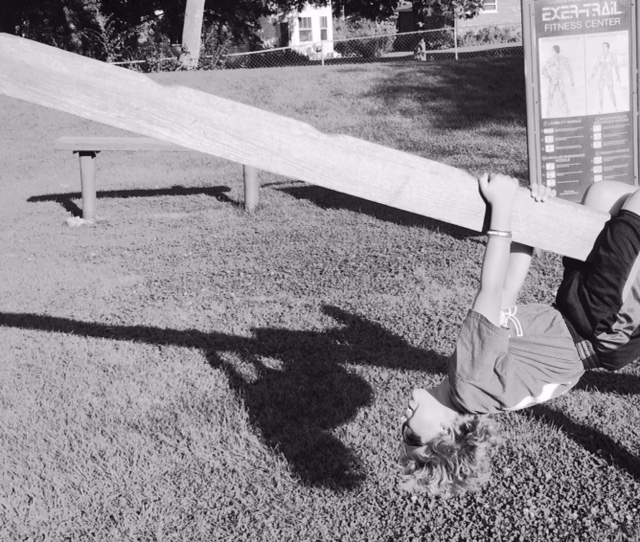 “People who don’t stay down after they fall or are tripped are often trouble makers. Hard to control. Which is the best kind of dangerous possible.”
— Brene Brown, “Rising Strong”

Each time he fell, I caught my breath, worried that he might be hurt, physically or emotionally. Or both. With each fall, a little piece of my heart broke. Isn’t that what happens when we watch someone we love fall down?

After the first couple of falls, I regretted the decision to come to the park in the first place. We should have just stayed at home, cool and comfortable and content. It had been Jackson’s idea, after all, to come to the park. Let’s make up our own American Ninja Warrior course!, he had suggested. Now he was falling and frustrated and defeated.

Teddy had gone through the course first, and in less than three minutes, he had fairly effortlessly completed each obstacle. “Great job, Teddy!” we praised. “You really are a ninja warrior!”

Then it was Jackson’s turn. After a shaky start, he quickly moved through the rest of the course. Until the last obstacle, that is.

Barefoot, he stepped onto the narrow beam and tried to walk up it. But almost immediately, he lost his balance and fell. He got back on and tried crawling up like his younger brother had just done, with his arms and legs wrapped around the beam like a monkey.

He got back on, crawled up a few inches, and fell again. Back on. Another fall.

With each fall, his face grew redder. Sweat-soaked hair clung to his forehead. His eyes narrowed. The seconds on my iPhone stopwatch clicked higher and higher.

Matt and I exchanged a knowing look. We could easily predict how this would end. Jackson’s frustration was palpable. We could see it in the tears pooling in his eyes, and hear it in the exasperated groans he let out with each fall. We had seen this situation play out a million times before, in a million different ways. He would soon get too tired, too frustrated, too angry. He would throw his arms up in a puddle of tears and angry excuses. I can’t do it!, he would scream. And I can’t say I blamed him. Lord knows, I would have thrown in the towel long ago, that’s for sure. But Matt and I kept cheering and encouraging, and fretting and worrying.

After minutes had ticked by on the stopwatch, and he had fallen for what felt like the millionth time, he got back on the beam. Again he tried Teddy’s tactic of crawling to the top. Again he fell.

But this time, when he fell, he didn’t let go. Instead, he kept his arms and legs wrapped tightly around the beam and crawled up the beam UPSIDE DOWN. Not so much like a monkey. More like…I don’t know…a sloth? He crawled and he inched and he crawled some more. Eventually he made it to the top.

Teddy had beaten him – by a lot – and I braced myself for the Hiroshima-like explosion that this news would create. As an older sibling myself to a faster and stronger younger sister, I understood. Losing sucks, but losing to a younger sibling sucks even more.

Jackson lay down on the bench and caught his breath. A few seconds later, he sat up and said, “Teddy, I can’t believe how fast you climbed up that last obstacle. That was really hard. Good job.”

Matt and I looked at each other, awed and a bit confused. Where was the meltdown? Where was the anger? Where were the excuses? Jackson actually seemed proud of himself and happy for his brother.

He hadn’t scored the winning touchdown or aced a math test. He hadn’t been elected class president or accepted into a prestigious college. He had simply finished an obstacle course on a hot Saturday afternoon in the park. He had persevered. He had gotten back up.

We tell our children to be brave and work hard. We remind ourselves to take risks and dare greatly. But as Brené Brown points out in her book Rising Strong, “when we make the choice to dare greatly, we sign up to get our asses kicked.” And that isn’t only painful, but it often isn’t pretty. In fact, getting our asses kicked and persevering anyway usually looks like a hot mess. It looks like red faces and sweat-soaked hair, like gritted teeth and narrowed eyes. It looks like bloody knees and tear-stained cheeks. It inherently involves falls and missteps, which are uncomfortable and embarrassing for everyone. So we turn away. Nothing to see here, folks.

As parents, we shower our children with praise for their successes. And we should. They deserve our praise and encouragement and feedback. But there is a tendency, I think, to sugar coat the struggle, to turn away from the falls, to skip over the battle. Not just when it comes to our children’s falls, but our own as well. Like I wrote last week, there is a tendency to talk about the struggle only after we’ve crawled our way out of the darkness.

So we focus on the achievements. We tout the victories, big and small. We celebrate their successes – the aced math tests and the winning touchdowns and the Ivy League diplomas. But I wonder if, in doing so, we sometimes gloss over the grit that was involved along the way? I wonder if, in reveling in the conquest, we turn a blind eye to the battles fought? I wonder if, in focusing primarily on the outcome, we develop a selective memory for the hard work and heavy falls, the skinned knees and the bruised egos, the broken hearts and the colossal screw-ups?

By focusing only on outcomes and goals attained, I wonder if we don’t inadvertently send the message – not just to our children, but to ourselves and to each other – that somehow it all just… happened. I worry that by painting broad strokes over the hot mess of perseverance – or the “messy middle,” as Brené Brown calls it – we are setting our children up to think that a fall is a sign of failure, instead of showing them that the falls are often part of the process. And I worry that we are creating a culture in which we as adults view our own hard times as an indication that we’re alone in our struggle, that we’re somehow doing it wrong (whatever “it” is), that everyone else is better, faster, smarter, or what have you.

Earlier this summer, Jackson pitched in his first baseball game. I worried that he would walk several batters, get frustrated, and leave the pitcher’s mound in tears. But after walking one batter, he went on to strike out three batters in a row. We all were stunned, and breathed a collective sigh of relief. Nice job, you must be so proud, people said to him. I posted a photo on Facebook, and texted a video to my family. It was a happy night for all of us.

But as happy as I was for Jackson on that cool August evening at the baseball field, I would rather congratulate him for what happened on that hot September afternoon in the park. Because when my son again finds himself struggling and falling and flailing (as he surely will), I want him to remember that he picked himself up off the ground before and he can do it again. I want him to be proud of hard work, not just the fortunate outcomes.

And as relieved as I was for Jackson after the baseball game, I would much rather celebrate his actions on the obstacle course. Because he had dared greatly, even though it meant falling hard. Because he had gotten back up. Because he climbed in his own way and on his own terms. Because he had persevered, with grit and with grace. 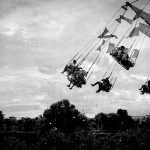 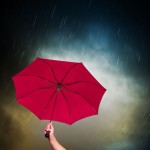 When the Sky Is Falling (or feels like it)