The holidays can be a tricky time for parents. On top of the pressure to give my kids the childhood memories of pine-scented trees and stocking-clad mantels (never mind the fact that we don’t have a fireplace mantel), there’s the struggle to fight the bursting-at- the-seams excess of the holidays and find a balance between giving and receiving.

My husband and I talk to our kids about generosity throughout the year, but there’s something about the holidays – with its glitch, sparkle, and sneaky advertising campaigns – that makes it even more difficult to affirm those values this time of year. And I worry about whether my children understand what generosity really means. Do they understand that it isn’t enough to give just so that you receive? Do they know that generosity means giving to strangers and family alike? Do they understand that generosity isn’t about charity, but about mutuality and an understanding that we’re all in this together, that we all need to take care of other?

We try to help them understand, but as with most things, I’m never sure it’s enough or having any impact. Last week, my 10-year-old son Jackson wrote out his Christmas last and we talked about his “wishes.” His requests for an iPhone 7 were quickly erased after I gave him an are-you-kidding-me raised eyebrow look and laughed hysterically. After writing down a few things, he got a bit more pensive. I asked if there were some people he might want to help, organizations he might give to. He wrote some more, and after a few revised drafts, he had his final list. When I looked at the list, I saw that interspersed with things like a Hot Wheels AI system, a Cozmo and a bunch of other toys I had never heard of, was “donations to the mosque we went to.”

You see, a couple weeks ago, our family went to an Open Mosque event at Masjid Al-Huda. To say it was one of the most beautiful and powerful experiences of my life is an understatement. The outpouring of love, togetherness, and generosity was simply breathtaking. The hosts welcomed their guests with broad smiles and open hearts, and hundreds of people of all walks of life and a wide range of faiths flocked to the mosque to show their support. I was reminded that even though much of the world’s pain and suffering is outside of our control, each and every one of us has the ability to reach out, to love our neighbors, and to make the world just a little bit better. We can each give generously and receive humbly. In other words, we can take care of each other.

So after Jackson finished his holiday wish list, I emailed a woman at the mosque a photo of it and asked how I could send in his donation. She was profoundly grateful and said she would find out how to make the donation. Expecting to receive an email with an address or link to PayPal, I was surprised to get a phone from her husband later that day and even more surprised when he asked if he could thank Jackson in person.

An hour later, their entire family – husband, wife and three young kids – pulled into our driveway and we welcomed them into our house. They thanked Jackson for giving one of his “Christmas wishes” to their mosque – a wish for which he wouldn’t see a direct benefit like he would from, say, a Hot Wheels AI System, Cozmo robot or other toy.

“We’re so appreciative that we wanted to bring something for you,” the woman said while her husband slipped out the door for a moment. Jackson and I looked at each other. Huh?

When the man returned, he was carrying a large box – the Hot Wheels AI System that was also on Jackson’s list.

“We appreciate your generosity so we wanted you have something too.”

“What?!?!” I stammered, while Jackson stood speechless. We hadn’t even given them a donation yet, simply expressed an interest in doing so, and here they were giving Jackson – someone they had never met – an extremely generous gift in return.

I stammered several thank-yous, as did Jackson. I choked back tears and we all talked for a little while. I wrote out a check to the mosque, making good on Jackson’s Christmas list wish (and mine as well), and then we took a couple photos. We talked some more, I handed them the check, and said goodbye. While I hugged the woman and we both cried on my front steps – with her children watching from their car and mine watching from the doorway (and a Jimmy John’s delivery guy awkwardly trying not to watch from the driveway thanks to an inopportune timing of our dinner delivery) – I thought: This is what mutual generosity looks like. This is what it means to take care of each other.

Like I said, I worry a lot about whether my kids are learning what it means to be generous. I want them to not just be grateful for what they have, but to know what it means for people to take care of each other. I want them to understand that generosity doesn’t mean charity or giving away what’s left over; rather, generosity means giving all that we have. Generosity means giving to strangers and friends alike. Generosity means taking care of each other – both giving and receiving – because, after all, we are all in this together.

I’ll be honest, much of the time I feel completely overwhelmed by the awfulness and despair going on in the world right now. On top of the worries I have about whether my children are learning to be generous and open-hearted, I worry about whether they are growing up in a world that sometimes seems broken beyond repair.

But while I stood on my front steps crying and hugging a woman I had just met as our children looked on, I realized that maybe I needn’t worry so much. My fears about the brokenness in the world and whether my kids are learning the importance of generosity might be founded, but the abundant love, kindness and generosity that is all around us is far bigger and stronger.

That night – and in the days since as this story has continued to make its way around the world – I’ve realized once again that intention of generosity is enough to trigger generosity in return, and kindness shared can start an avalanche of kindness as well. The world might be filled with pain and fear, but it is also filled with beauty, goodness, and people who see the world not for its brokenness, but for the ways they can help it heal. That night I was reminded that life is good and the world is a beautiful place.

Because we can choose to make it so. 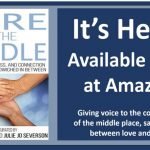 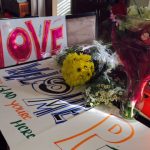