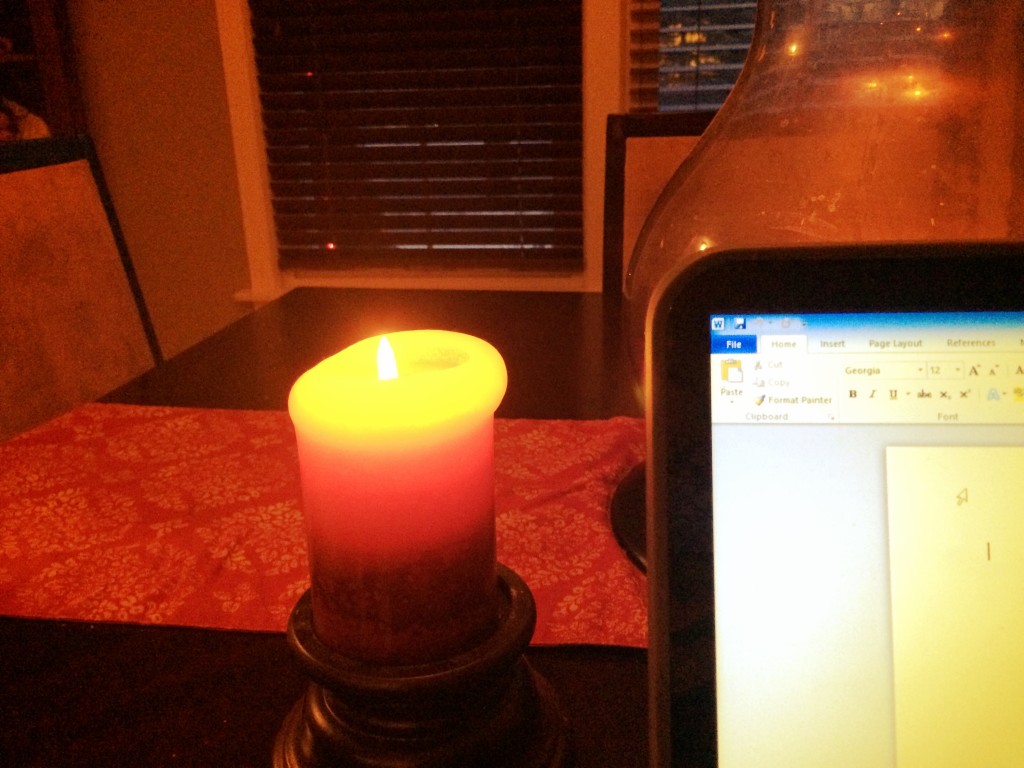 Author’s Note: This piece was written several days ago, but it took me almost a week to show up enough to post it. Baby steps, y’all, baby steps.

Earlier today I sat down to write. The conditions were optimal, just the way I like it. A candle flickered in front of me. The Shins were playing in the background. Teddy was building a fort, and Jackson wasn’t home from school yet. All was quiet – well, relatively quiet – and I was hoping to make some progress before the after-school chaos began.

I typed a sentence. Deleted it. Tried another one. Deleted that one too. I stared at the computer screen for a while. Typed a few words. Deleted them.

This type-delete-stare-at-the-screen-type-delete rhythm has been my routine the past few weeks, much to my disappointment and frustration. After a month of less-than-ideal conditions – travel plans, holiday chores, parties, and winter break – I was ready and eager to get my head back in the game. I had lofty goals of furiously typing away or scribbling in my notepad each night. And the conditions have been optimal for getting back into a regular routine too. With the boys back in school (a couple of unexpected school cancellations aside), I have extra time. I’ve been jotting down ideas for the past few weeks so potential material is there. I’ve been reading William Zinsser’s On Writing Well and re-reading Anne Lamott for inspiration. I even found some new playlists and bought new candles.

But, for some, reason, the words have not been flowing as I had hoped. When they do come, they feel clunky and awkward, disconnected and weak. And I, in turn, feel insecure and scared.

Perhaps my writing muscles have atrophied a bit and I just need to write those crappy first drafts, as the experts recommend. Maybe I’m a little insecure because the past few months have been so focused on bringing Open Boxes into the world and I just need to move on to what-comes-next. Or maybe I’m just scared that there might not be a what-comes-next and I’m searching for validation.

Whatever the reason, something tells me that I might not alone. I know that other writers go through these periods of uncertainty, stretches where they have to force themselves to sit down, and glue their butt to the chair, until they have tapped out a few sentences. And something tells me that we all have times when we are unsure and scared about what we’re doing and where we’re going, whether it has to do with our career, a friendship, parenting, a relationship, or what-have-you.

In any event, I’ve grown a bit tired of trying to figure out the why of it all and I just want to move on to the how. And though the answer seems relatively simple, it certainly isn’t easy: Show up and do something. Even if it’s awkward and painful and clumsy, just show up and do SOMETHING.

A few weeks ago, an old friend called seemingly out of the blue. We hadn’t talked in years, though we kept in touch here and there on Facebook and through emails and with Christmas cards. As I listened to her message on my voicemail, bravely and vulnerably reaching out, I started to cry. I missed her, certainly, but so much time had passed since we had last connected that I was also a little scared about calling her back. Was she okay? Would the conversation be awkward? What would we talk about? Nonetheless, I called her back a few minutes later and, yes, there were a few minutes of awkward small talk. But then she showed up – I mean really showed up – and something cracked open in the best possible way. We talked about hard things and good things and scary things and way-back-when things.

Nothing about the conversation was ideal – we had a bad cell phone connection, my dogs were barking, and the kids were making lots of noise in the background – but somehow the connection felt bigger than a telephone conversation; it felt transformative and almost other-worldly. Maybe that’s what happens when we show up? Love and light squeeze their way into the broken-open cracks.

Earlier today the conditions for writing were ideal – time, lighting, ambience, music was all perfect – but it just didn’t work for me. And now? The conditions are, let’s just say, so very less-than-ideal. The boys are bouncing off a cushion pile they have assembled in the family room. They call me over every few minutes to break up fights, wipe tears, and admire the new fort they are building. And yet I’m showing up and doing something, and somehow it feels right.

Maybe the conditions and time don’t matter as much as I thought. Maybe it is the spirit and the heart, the showing up and doing something, that matter so much more. 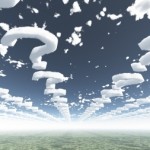 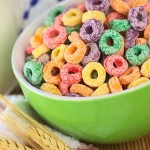 Cereal with a Side of Compassion