Author’s Note: This post was originally published two years ago, but it is just as applicable today. Not just because our dog Jobe is once again sick – well, not necessarily sick so much as recovering from surgery – but because compassion and forgiveness are ALWAYS applicable. Every day. Every moment. I am happy to be a part of 1,000 Voices for Compassion, a group of bloggers from around the world who will all write posts about compassion, kindness, and love on February 20. Stay tuned….And, as always, be kind and be gentle. Take care of each other. We’re all in this together.

“It’s not 7:00 yet, Jack,” I murmured groggily. Slowly, but quietly, my son plodded out of our room and I heard his bedroom door gently shut.

Soon – too soon – he returned, however, crawling into our bed, elbows stabbing my eye and knees pushing into my side.

“It’s 7:00,” he said hopefully. He received grunts and snarls in return.

“Daddy, will you come down and play with me?” No response.

“Mama, can you get me some cereal and turn on a show?” No response.

Undeterred, he continued his litany of requests until finally I stumbled out of bed to let Jobe, our whining dog, out to go to the bathroom for the fourth time in the past five hours.

“Shhhh. Go downstairs and I’ll be right down.” I hissed at my son.

“Jack,” I cut him off sternly. “I. Said. To. Go. Downstairs. Everyone else is still sleeping.”

This time he didn’t exit the room slowly or quietly, but with angry stomping feet, arms crossed in front of him.

I caught up to him and shuffled him into the bathroom.

“Listen, Jack,” I whispered. “I am sorry. Daddy and I are just very tired. Daddy was up working very late and I was up a lot with Jobey who is sick. We don’t mean to ignore you. We are just very, very, very tired. Please go downstairs and I will be down in a minute.”

“Okay,” he answered reluctantly and scuttled off.

While I brushed the night off my teeth, I heard stools and chairs scraping across the kitchen floor. I heard pounding, banging, dropping kitchen utensils, and grunts.

What the fuck is he doing down there? I said to myself. (Although I have significantly improved my potty mouth since having kids, I still cuss like a sailor mentally.)

After brushing my teeth and changing into some real clothes, I was almost beginning to feel human again. I staggered downstairs, bracing myself for a disastrous mess that I would need to clean up. Certainly, I thought, there must be glass all over the floor, cereal strewn across the counter, and milk leaving spotted stains on the cabinets, with piles of dog shit to add to the mess.

Instead, I entered the softly lit kitchen to find Jack standing on a stool at the kitchen counter with an unbroken bowl, an unspilled gallon of milk, and a spoon in front of him. He was feebly wrestling with the packaging of an unopened box of cereal. And thankfully, there was no dog shit to be found.

“I was getting you your cereal, Mom, since you are so tired,” he proclaimed with a humbly proud smile.

Not once has my son ever fixed me breakfast. Not once. Ever. But there he was, making me breakfast, on his own, after being ignored and scolded since waking up a half hour earlier. Clearly the only proper response was to give the biggest hug and wettest kiss ever, which is exactly what I did.

The day improved significantly from that point on. Jobe, our sick dog, recovered from whatever had been ailing him during the night. Several cups of coffee helped give me the jolt of energy that I needed. And Jack and his brother had a few minutes to play with my husband before he had to catch the commuter train to work.

When I think back on my son standing in the kitchen, carefully trying to help me out in his own small way, I am utterly  amazed. I am astonished at the innate ability of a six-year-old to hear my apology, appreciate my explanation, and then to try to make things easier for me. And I am thankful that I took the time to explain my initial disregard and grumpiness – because until I explained to him the reasons for my crabbiness, he was left with no other conclusion than to think that my bad mood was because of him and to assume (like all children, young and old, seem to do) that it somehow had to do with him.

And that breaks my heart.

But this line of thinking is not only unhelpful, it is unrealistic. Parents – heck, everyone – makes mistakes. We mess up, we fall short. And it does no one any good to pretend that the recipient of our frustration and weariness isn’t often the person who least deserves the mistreatment. Let’s face it, there are times when we needlessly snap at our children, when we don’t give them the attention that they need and deserve, when we falsely accuse them of something, or when we basically just let them down in some way or another. I know I am guilty of these things far more often than I care to admit.

But, perhaps, it isn’t as important that we shield our children from our darker sides and the messiness of life, as it is that we let our children see us and know us and love us with all of our muddled complexities. That we let them know – explicitly and emphatically – that our mood has nothing to do with them, by explaining that sometimes we have other things going on our lives that affect our moods and keep us from being the best version of our selves. That we teach our children the importance of an authentic apology by apologizing to them, not just telling them to apologize when they do wrong. That we always, always, always tell them that we love them immensely regardless of the chaotic swirl of daily live that we get caught up in. That we let them see our vulnerabilities and let them try to help us in their own way.

Because, honestly, that was the best bowl of cereal I have ever tasted. 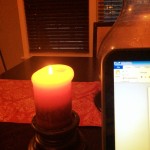 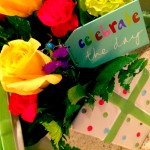