With this mantra, I gave myself a bit of a pass for the past few months. As a result, we enjoyed one of those magical summers that we didn’t want to end. There were trips to the lake and long afternoons at the pool. Flexible bedtimes and lazy mornings. Baseball games and picnics. I reduced my work load. I wrote a little, and read a lot. I said “yes” more often. I put off anything that wasn’t necessary, telling myself that it could be done in September.

And now, here we are, in September, and all those things that I’ve been putting off – the cleaning and organizing, the new habits, the freelance work, the submissions, the writing, the blank pages – are here, now, staring me in the face.

But I’ve procrastinated long enough. I’ve hemmed and hawed. I’ve rested and waited, watched and asked questions. I’ve dipped my toes in and tested new waters. I’ve learned which pools feel good and which ones aren’t for me. The only thing left to do is jump in.

And then I didn’t write anything at all for a few weeks. I stopped jumping in, or even dipping my toes in for that matter.

Part of the reason for my hiatus was because I was traveling and then we were getting ready for the first day of school and then I was playing catching up on just about everything. But, really, the reasons that I stopped writing for a while, that I’ve written less the past few months, are fear and an utter lack of confidence.

Truth be told, I’ve been suffering from a weakened sense of confidence for the past several months – maybe my whole life. I’ve always been more of an “if” person than a “when” person. Last spring, I experienced a situation that left me shaken, raw, vulnerable, and scared. I wasn’t sure where I belonged, or what I should do. Nonetheless, I resolved to stay soft, to move on – and I have, for the most part. Since then there have been other setbacks, as well as a few successes, as is typically the case. You win some, you lose some, they say. But for whatever reason, I have noticed that lately my steps are a bit more cautious and measured than I would like. And let’s be honest, it’s hard to run when you’re tip-toeing from one stepping stone to the next. And I want to run. I want to jump, as scary as it is.

We are here now, in September, and I have nowhere else to turn. And that terrifies me just a little bit. Maybe it scares you too. Or maybe not. Maybe you are running full-steam ahead across the stepping stones, in which case, please please tell me your secret. I still don’t quite know what comes next, or where exactly I belong – at least in the writing world (both the online one and the traditional one). It seems that people want how-to guides and video tutorials, advice and answers. And, well, I don’t have many answers. I can’t offer up how-to guides and I hate giving advice. What I can offer, however, are stories and ideas, thoughts and questions (regardless of whether they have any answers), and the hope that somewhere in all of this – in the writing and in the reading, in the starting and the starting again – we will feel a little less alone.

And maybe that is enough. Maybe the question-asking and story-telling and truth-sharing is exactly what I need right now. Maybe it’s what you need too. Maybe.

What do you want to start (or start again) in September? What plans/goals do you have for the fall? 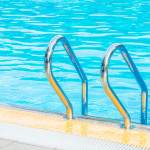 To the Teenage Girls at the Swimming Pool