It seems that the sky is, in fact, falling.

Well, not necessarily the sky, but the ceiling. To be specific, the ceiling in our living room.

The ceiling in our living room is falling.

This is, as you might have guessed, not a good thing.

Our sky-is-falling debacle started a little over a week ago when I noticed water pouring into the living room from the bathroom above it. Also not a good thing.

Plumbers were called. Temporary repairs were made. Instructions were given. And then…I moved on. I forgot about it. Well, I didn’t so much forget about it, as much as I added it to that ever-growing list of things that need to be taken care of sometime. You know the one. It’s the same list that has “clean out basement” and “donate old television” and “get the oil changed” on it.

It stayed on that list – the to-do-just-not-right-now list – until Sunday night when large chunks of the ceiling started falling and then Monday morning when water was, once again, pouring into our living room.

Now call me crazy but I prefer that water stay in the shower and that ceilings stay above my head. I prefer that the sky does not actually fall.

Between the things that I want to do and the things that I need to do and the things that I think I need to do, there never seems like enough time. Not enough time in a day, not in a week, not in a lifetime. Each night, I go to bed feeling like I neglected something, like I fell short somehow. Between homework and after-school activities, work projects and volunteer commitments, emails and meetings, grocery shopping and laundry, something always feels undone. What did I forget to do? Who did not get the attention that they deserve? What am I neglecting?

Don’t get me wrong, the too-much-ness isn’t all tedium and chores. There are heaping doses of good stuff too. Lunch with friends, date nights, baseball games, family dinners. Good stuff. Really good stuff.

But sometimes the good stuff mixes in with the other stuff and it all just feels like too much. Too heavy. Too cracked. Too saturated.

And then, eventually, the sky starts to feel like it’s falling.

Part of this too-much-stuff-but-not-enough-time-ness is due to the fact that we’re still trying to transition from the lazy, halcyon days of summer into the structured routine of the school year. Part of it the continual adjustment to fuller schedules, heavier workloads, heightened expectations. Part of it is simply bad timing, with several work obligations and social commitments all happening at the same time. Part of it is a prickly and painful awareness of just how brutal, beautiful, fleeting, and precious life is. And part of it is the simple fact that life with young children is just too much of one thing or another sometimes.

So I’m making some hard choices about where and how I spend my time. I’m trying to be more intentional about what I say “yes” to so that I can focus on those people and activities that matter most to me. I’m trying to be true to me and my strengths, instead of trying to fit into a mold made for someone else. And I’m trying with all my might to let go of the expectations and the should-do’s and the what-if’s. But it’s hard. Ohmygosh, is it ever hard.

But I’m hoping that with some elbow grease, tough conversations, and a little luck, the water will staying where it’s supposed to. And maybe – just maybe – I can stop the sky from falling down.

And maybe you can too. 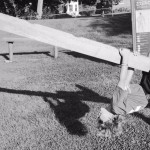 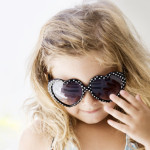 Listening to the Little Girl with a Potty Mouth