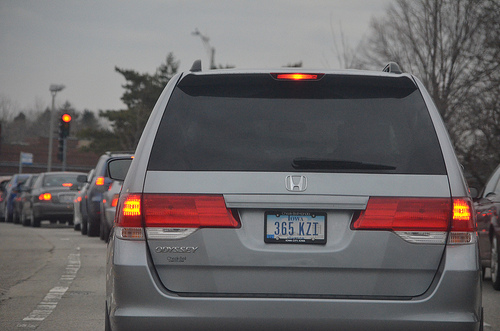 This post may be my most controversial post to date.  I’m going to address what might be one of the most divisive and provocative issues facing our society today.  No, it’s not marriage equality or the protection of women’s reproductive rights.  It is not the upcoming presidential election, the vulnerable economy, or even the war in Afghanistan.

It is…Are you ready for it?…the minivan.

Yes, few things are as prickly as the minivan.  As the proud new owner of a used Hondo Odyssey, I have been thoroughly amused by the polarity and intensity of the reactions that our purchase has sparked.  Some friends and family have expressed disbelief, disappointment and displeasure, shaking their heads sadly at our new mode of transportation.  Even the Honda salesman who sold me the car was not shy about admonishing the minivan and emphatically stating that his wife refused to drive one.

Others – usually those who already own a minivan – have literally cheered with delight at our new set of wheels.

Why the controversy?  Why such strong emotions?  Isn’t it really just a machine, a conglomeration of metal, plastic, and electronics designed to get us from Point A to Point B?

Perhaps the controversy exists because some see the minivan as a symbol of the surrender to the ideals of a conformist society.  Perhaps it is because some use the minivan as a means to display selfless prioritization of familial needs above their own personal desires.   Or perhaps it is just a trivial way for us to attach judgments and ideals onto something relatively insignificant.

And how do I see the minivan? Well, the 25-year-old me is certainly shaking her head reproachfully, having never thought that I would own a (gasp!) minivan.  But then again, we all make assumptions about our future lives, saying “I will always…” or “I would never…” and “If that were me, I’d…”  But circumstances change, needs change, expectations change, and, accordingly, we change.  We let go of the insignificant – the judgments, the assumptions, the stereotypes – and we hold onto those things that make us who we are –relationships, happiness, authenticity, simple pleasures. In fact, the minivan may actually be an exemplification of my life in general at this point in time – practical, solid, comfortable, and open.

So, if you see a thirty-something woman driving around in her newish used minivan, sporting a calm, easy smile as she schlepps her kids to the proverbial soccer practice, that will be me.

And, in case you’re wondering, we will be rocking out to Animal Collective, Grimes or some other indie rock band, not Dora sing-along songs.  Yep, the minivan really is a study in contrast.

Back to top
mobile desktop